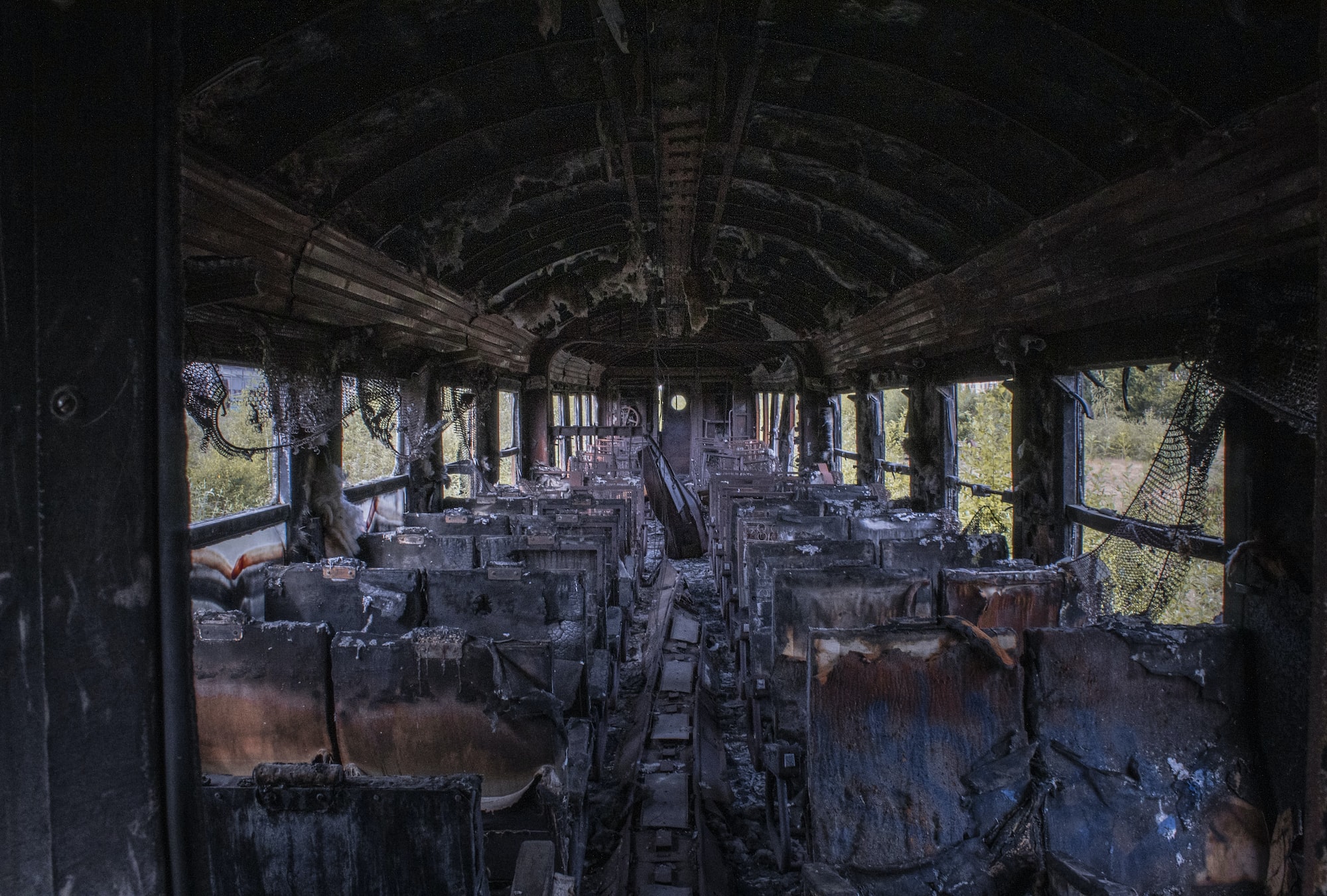 A Newton’s Cradle was tucked in the corner, sat on a desk. It filled the small office with the sound of clicking.

It was noisier than roadwork; the metallic surfaces of the balls made brief but continuous contact. One shattering bang after the other.

I was helpless to stop it.

I could only follow them with my bloodshot eyes as they swung on their own accord.

My pupils swivelled left and right.

The temperature was low, not so low that my teeth chattered, but low enough to make me feel uncomfortable.

Low enough to create goosebumps and cause the hairs on my arms to stand up.

Several small gnats lay dead on the windowsill. Two survivors weakly headbutted the dirty glass, weaving in-between the steel bars, trying to escape through the small gap they had entered through.

I also wanted to leave, but I couldn’t.

One of the weaker gnats started to wander, flying aimlessly until it landed on the tip of my nose.

My reaction was slow; a moment passed before my eyes could focus on the thing, and it took two more seconds before I raised my hand and swatted it away.

As it fled from me I found myself watching it.

I became fixated on its frame and its motions. I could see the grooves on its back and the whiskers on its head. I watched as it travelled around the room in circles until eventually, it landed back on the window.

“Do you find something interesting about those bugs?” Doctor Rivers asked me with her signature monotonous tone.

She had been sitting opposite me, dressed in her white slacks, for ten minutes or more, watching my dull movements.

I was an experiment for her.

To her I wasn’t human, I had lost that right.

Through the round spectacles framing Doctor Rivers’ face, I could make out my reflection.

My skin had become a sallow yellow, my nails raw and exposed from being incessantly chewed, and my figure was skeletal.

Heavy bags rested under my eyes.

Doctor Rivers leaned forward, her braided head partially blocked my view of the window, “Why don’t we talk. This is our third session together and you’ve probably only said three words to me. Every question I ask you, you either ignore me or refuse to answer.”

She paused, waiting for me to say something, but I didn’t.

“There have been complaints because you’ve been screaming at night, and honestly you look terrible.” Her face was filled with clinical concern. “I want to help you and I would really like to know more about you.”

Her brow creased and she almost appeared genuinely worried.

However, that was unlikely.

My focus shifted back to the loud newton’s cradle.

“Danny, you can’t keep your problems inside for too long, they’ll just eat away at you.” Her professional tone couldn’t hide her annoyance.

The words of Doctor Rivers were like the buzzing of the gnats to me, and the clicking of the cradle, grating.

She wanted to give me treatment but she didn’t know why I was sick.

She wasn’t capable of knowing.

She was blissfully unaware of the smiling figure behind her.

Unaware of the claws that rested on her shoulders and the slender long finger, with its jagged black nail, that laid on her neck.

She was blind to the grey moths that crawled on the walls, in the cracks and across the floors.

“You’re young Danny,” Doctor Rivers continued, trying yet again to start a conversation, “and in about five years or even less you can be out of here, but if you remain un-cooperative you’ll be in and out of institutions your entire life. You need help.”

“That won’t happen,” I whispered.

Doctor Rivers froze at the sound of my voice.

“Can you say that again?” She asked in an unusually high tone, so high in fact that her voice became squeaky.

“That won’t happen,” I said, this time louder. My throat was coarse and scratchy.

“I won’t heal, and I won’t be in institutions like this for my entire life.”

Doctor Rivers scribbled in her notebook with fervour. “Why do you think that?”

I smiled, “There are worlds that walls can’t touch, and soon I’ll be there.”

My smile widened deliriously as I thought of the future, “and none of this will matter.”

She gave me a questioning gaze.

She peered up from her notes, curiosity in her gaze, “Why don’t you help me understand then, I want to understand you, Danny.”

I don’t know why, perhaps I was bored… I began to talk.

“There was this moment” I confided.

“A moment when I realised the fragility of my existence.”

“It was silent, but I felt it. That thudding, that warmth, when the strength in my body began tensing up just before it went limp.”

“What do you mean?” Doctor Rivers was understandably confused.

“I saw all the energy flowing out of me. I saw all the memories; the regrets, lost loves, the humdrum days I pined for next to the exciting ones I craved. They were all being sucked away like they were being pulled by the tide, and before I knew it, the time had just stopped.”

Hot tears leaked from my eyes, I couldn’t stop them even if I wanted to.

“What day?” Her ears twitched as she tried to keep up with my ramblings.

“The day I changed.”

I looked up at the ceiling and reflected in my pupils was a shadowy figure crawling on the walls.

Grey moths swarmed around it.

Inky black liquid from the tips of its fingers began to drip down onto my brow.

“It started with a smile.”